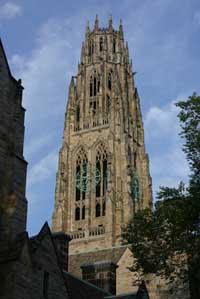 The U.S. Department of Justice has filed a lawsuit accusing Yale University of racially discriminating against many Asian and white applicants by considering race at multiple stages of its admissions process and racially balancing its classes.

The lawsuit, filed Thursday in Connecticut federal court, says Yale discriminates on the basis of race and national origin, injuring applicants and students.

The suit alleges violations of Title VI of the Civil Rights Act, which bars discrimination in programs that receive federal financial assistance. Federal funding received by Yale includes $630 million received annually from the U.S. Department of Health and Human Services, the suit says.

The U.S. Supreme Court has ruled that colleges receiving federal funds can consider race among a number of factors.

But “Yale’s use of race is anything but limited,” according to a DOJ press release. “For the great majority of applicants, Asian Americans and whites have only one-eighth to one-fourth of the likelihood of admission as African American applicants with comparable academic credentials.”

Yale mostly disfavors Asian and white applicants, although it does favor some Asian American subgroups, such as applicants who identify as Cambodian, Hmong, Laotian or Vietnamese, the suit says.

The New York Times, Reuters, USA Today and Politico are among the publications with coverage of the lawsuit, United States v. Yale University.

Peter Salovey, president of Yale University, said in a statement the DOJ lawsuit is baseless, and its allegations were based on “inaccurate statistics and unfounded conclusions.” Salovey said Yale considers race and ethnicity as just one factor in a comprehensive review, according to reports in the New York Times and Politico.

“I want to be clear: Yale does not discriminate against applicants of any race or ethnicity,” Salovey said. “Our admissions practices are completely fair and lawful.”

The DOJ had previously supported a lawsuit in 2018 alleging that Harvard discriminates against Asian Americans in undergraduate admissions. A federal judge ruled for Harvard in 2019.