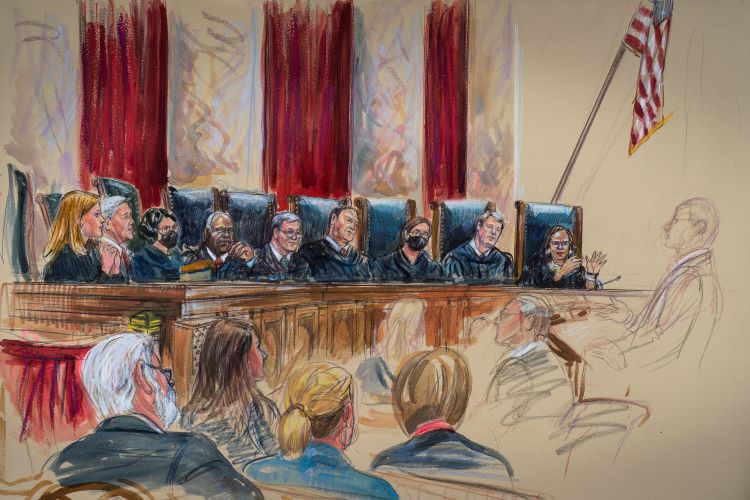 U.S. Supreme Court Justice Ketanji Brown Jackson has outpaced her colleagues in questioning while participating in her first oral arguments on the high court.

After eight arguments, Jackson had spoken more than 11,000 words, compared to nearly 5,500 words spoken by the next talkative justice so far this term, Justice Sonia Sotomayor, according to statistics by Adam Feldman of Empirical SCOTUS.

Justice Elena Kagan was in third place, “indicating that while the court’s three liberals may be outvoted in many cases this term, they are not going to be outargued,” the Washington Post reports.

“Jackson was a persistent questioner in every case,” the Washington Post reports. “Her contributions ranged from the sweeping—a rejection of an originalist interpretation of a colorblind Constitution that provoked swoons from the liberal legal community—to the kind of mundane minutiae upon which even Supreme Court decisions turn.”

Supreme Court journalist Adam Liptak of the New York Times said Jackson’s questions “were confident and sharp. And like the other justices, she often used them to make points, not just to elicit information.”

The articles referred to Jackson’s comments pushing back against Alabama’s arguments in a voting-rights case that taking race into account would violate the 14th Amendment’s equal protection principles.

“I don’t think we can assume that just because race is taken into account that that necessarily creates an equal protection problem,” Jackson said. “I understood that we looked at the history and traditions of the Constitution at what the framers and the founders thought about. … It became clear to me that the framers themselves adopted the equal protection clause, the 14th Amendment, the 15th Amendment, in a race-conscious way.”

The entire point of the 14th Amendment, she said, was to secure the rights of freed slaves.

The Washington Post and the New York Times, along with Bloomberg Law, noted that oral arguments are getting longer, which makes comparisons more difficult.

The longer arguments are due to a new hybrid procedure that involves free-for-all questioning combined with a format in which each justice gets a turn.

“Arguments that once ended promptly after an hour now routinely go much longer, sometimes more than twice that,” the Washington Post reports.