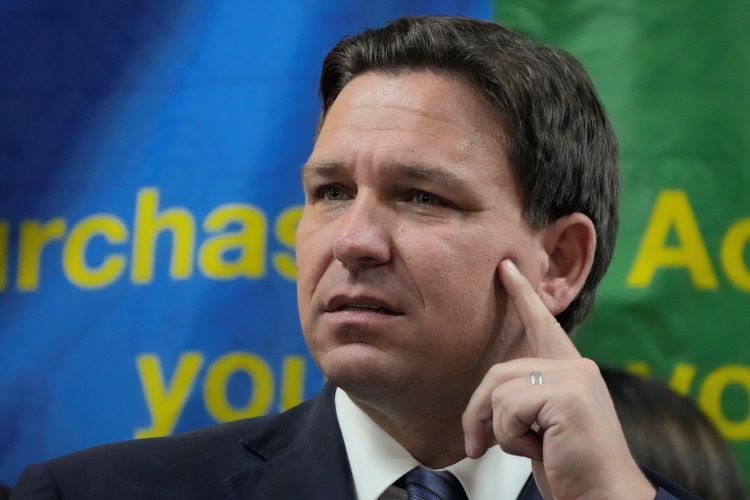 Republican Florida Gov. Ron DeSantis listens to a question during a press conference Sept. 7 in Miami. The Republican governors of Florida and Texas have delivered migrants on planes and buses to Washington, D.C., New York City and Martha’s Vineyard in Massachusetts. Photo by Rebecca Blackwell/The Associated Press.

A class action lawsuit filed Tuesday on behalf of at least 50 asylum-seekers alleges that their flight from Texas to Martha’s Vineyard in Massachusetts violated constitutional protections, federal statutes and tort law.

The Sept. 20 lawsuit was filed in Massachusetts federal court by Lawyers for Civil Rights, an organization that provides free legal assistance to the migrants, according to a press release.

Name plaintiffs are three Venezuelan migrants and Alianza Americas, a network of groups supporting immigrants in the United States. Defendants include the state of Florida and its governor, Republican Gov. Ron DeSantis.

But the lawsuit claims that the migrants didn’t make a decision to travel based on the facts. The suit says the migrants in San Antonio were “fraudulently induced” to board the planes through false promises of job opportunities, schooling for the children and immigration assistance. The migrants were provided with items such as $10 McDonald’s gift certificates to gain trust and then were housed in hotels to sequester them until they boarded chartered flights, which cost $12,300 per passenger, according to the suit.

The suit lists these causes of action:

• Section 1983 of the federal civil rights statute because of violations of the Fourth and 14th Amendments. Acts violating the Constitution include illegal seizure, false arrest and fraudulently induced travel that deprived the immigrants of liberty, equal protection and due process, according to the suit.

• Section 1983 of the federal civil rights statute by carrying out a conspiracy to deprive the plaintiffs of their civil rights.

• The supremacy clause because the federal government has exclusive power to regulate immigration under the Constitution.

• Violation of the American Rescue Plan Act of 2021 because Florida designated $12 million in federal coronavirus recovery funds to fly immigrants to other states.

The suit seeks an injunction, damages and an award of attorney fees.