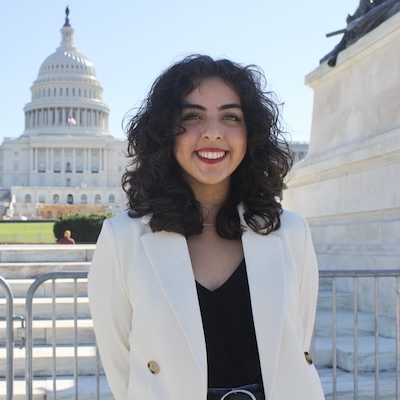 “A lot of people frequent the hotline, so you build a relationship with these callers who are really trying their best to understand the process,” says Emma Yznaga, who worked as a full-time intern for four months.

As a college student, Emma Yznaga volunteered often with Team Brownsville, a nonprofit organization near her home in Brownsville, Texas, that assisted asylum-seekers who were living in tents just across the border in Matamoros, Mexico.

She brought families food, water and clothing and helped provide educational and creative arts classes to children. As she talked with them about their experiences, she realized she wanted to do more to help them with their cases.

Yznaga heard about the ABA Commission on Immigration’s Detention and Legal Orientation Program Information Line and applied to be one of its interns. In September 2020, during her senior year at the University of Texas at Austin, she joined the program, which accepts calls from immigrants and refugees who are detained by U.S. Immigration and Customs Enforcement in more than 200 facilities across the country.

Interns like Yznaga, who are either upperclassmen undergraduates or law students, not only answer these calls but help pull together general information individuals in detention need for their cases, such as how to apply for asylum or how to appeal a denial of asylum. These services are free for detainees who reach the information line by dialing 2150# from inside the detention centers.

“A lot of people frequent the hotline, so you build a relationship with these callers who are really trying their best to understand the process,” says Yznaga, who worked as a full-time intern for four months. “The majority of people don’t have access to counsel, so the ABA hotline is vital to them understanding how to represent themselves in court and, in turn, empowering them to do so.”

Zohal Khan, a staff attorney at the Detention and LOP Information Line, manages several cycles of interns during the year. She accepts applications on a rolling basis and hires at least two each semester and in the summer, as well as during other school breaks in the spring and winter.

Interns reported to the ABA’s Washington, D.C., office prior to the COVID-19 pandemic, but they now work remotely. Interns aren’t required to have previous experience with immigration or law and receive training on how to take and record calls. They can join a daily group chat, where Khan and other program staff answer their questions as they talk with detainees.

Because of the high volume of Spanish-speaking callers, Khan says they prefer interns to have Spanish fluency. Other language skills can be helpful, but interns also have access to a telephone interpretation service during calls.

“We have a need for dedicated people who are interested in the field, who are interested in helping these detained immigrants. And also, we’re able to offer them the experience of having this direct interaction and more of a hands-on internship than they would get at many other organizations,” Khan says.

‘Immigration work is about people’

Caroline Garrison, a 2L at the George Washington University Law School, wants to practice immigration law in her home state of Texas after graduation. She applied for an internship with the Detention and LOP Information Line so she could better understand how detention and removal proceedings work and get experience working with detainees.

She says the biggest lesson she learned as an intern last summer was proceedings can be complex and isolating.

“Our callers definitely need information, contacts for pro-bono lawyers, etc., but just as much need to know that there were others out there who were listening to them,” Garrison says. “Immigration work is about people, at its core, and this internship [drove] that home for me.”

Garrison remembers talking to a few first-time callers who had little information about what they or their family members would face in the U.S. immigration system. While those calls were challenging, she says they were also rewarding when she could help them locate a relative or give them useful information about their options and court dates.

Yznaga, who now works as a legal assistant at the Refugee and Immigrant Center for Education and Legal Services in San Antonio, Texas, says along with assisting individual callers, interns help “create a ripple effect of hope and empowerment” through the ABA’s information line.

“We do our part in giving one person information on the phone, but then that one person can go to X amount of other people in the detention center and tell them, ‘There are these materials that can really help you in court, help you represent yourself,’” she says. “I had one caller who wanted to do whatever he could to help other people in the detention center. He would always call asking for resources for other folks, and I think that was really inspiring.”

While students can apply for the internship at any time, Khan says she will begin recruiting for the spring cycle in late October or early November.

For more information or to apply, visit the Detention and LOP Information Line website.