'The personal attacks on our judges and prosecutors must cease,' says ABA president 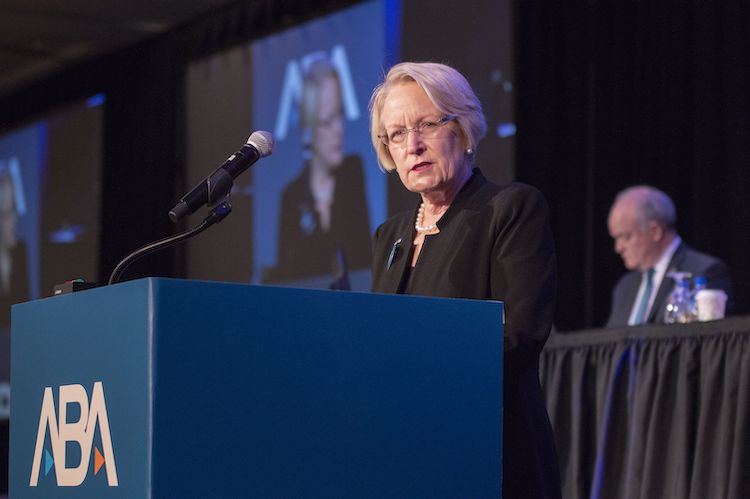 ABA President Judy Perry Martinez reminded the House of Delegates at the 2020 ABA Midyear Meeting in Austin, Texas, on Monday that Americans of all different backgrounds are paying more attention to issues of justice.

“They’re talking about due process, evidence, attorney-client privilege, fair trials and just punishment—the imperative of the oath to protect and defend the Constitution, no better demonstrated than when lawyers and public servants operating within the framework of law are able to do so free from obstruction, intimidation and retribution,” Martinez said.

“However rough our current places and spaces are, however long the arc of the moral universe may be, justice is and always will be our guidepost,” she added.

Martinez introduced Texas Supreme Court Chief Justice Nathan Hecht, who addressed the House later in his role as president of the Conference of Chief Justices. She said the ABA and the Conference of Chief Justices, along with the National Center for State Courts, continually address the challenges and opportunities presented by their shared mission of judicial independence, a fair and impartial judiciary, access to justice, and a strong legal profession that supports the rule of law.

She also contended that all bar associations are responsible for ensuring that the public understands the importance of the independence of the justice system.

“The personal attacks on our judges and prosecutors must cease,” Martinez said, receiving a standing ovation. “No one, no one, should interfere with the fair administration of justice.

“And no one, no one, should have to live in fear for following the law and upholding our Constitution.”

Martinez cited a recent report from the Center for Strategic and International Studies that shows that foreign actors are undermining the United States by spreading messages on social media that increase public divisions and mistrust of democratic institutions, including judges and courts.

She said the report also calls for efforts to promote understanding of the justice system and referenced the ABA’s longtime leadership in public education through several initiatives, including Law Day, the Judicial Division’s National Judicial Outreach Week, and the Division for Public Education’s National Civics and Law Academy.

Martinez also highlighted the 100th anniversary of the 19th Amendment, which guaranteed the right to vote to women. The ABA’s centennial celebration is chaired by Judge M. Margaret McKeown of the 9th Circuit U.S. Court of Appeals at San Francisco and offers bar associations, courts and others the opportunity to engage in civics education and encourage voting.

So far, she said, more than 120 bar associations, state courts and other groups in all 50 states have already or will showcase the ABA’s 19th Amendment exhibit. U.S. Supreme Court Justice Ruth Bader Ginsburg also participated with the ABA in a recent program at the Georgetown University Law Center.

Martinez contended that the ABA promotes public awareness and advocates for fair and impartial courts through the Standing Committee on the Federal Judiciary’s efforts to evaluate nominees for lifetime positions on the federal bench. She said its fight for judicial independence and due process is also evidenced by its call for a new immigration court system that guarantees the independence of judges and removes them from Department of Justice control.

She added that the ABA’s Governmental Affairs Office works with volunteers across the country to support court funding and security, criminal justice reform and access to justice. She told the House that despite four years of federal government-backed proposals to defund the Legal Services Corp., ABA members have advocated for the organization and assisted in a record amount of funding being allocated to it this year.

Martinez also recognized Jim Sandman, who will step down as president of the Legal Services Corp. this week, for his service.

She pointed out that the ABA encourages pro bono service through a number of initiatives, including the National Celebration of Pro Bono. In 2019, she said, more than 1,600 events—an increase of nearly 200 from the past year—were held in all 50 states, the District of Columbia and territories.

Since 2019, the Young Lawyers Division has responded to 15 declared disasters across the nation and fielded more than 5,000 calls for assistance with insurance, housing and other issues from survivors. Additionally, she said, more than 6,800 lawyers have registered with ABA Free Legal Answers and addressed nearly 100,000 questions from the public.

“Despite our successes, we cannot deny that legal aid funding and pro bono will never come close to fully addressing our nation’s unmet legal needs,” Martinez said. “We—the ABA, the leaders of state, local and affinity bars and our affiliated organizations—need to encourage bold thinking and urge robust discussion and data gathering about ways to deliver greater efficiencies for lawyers and the potential for meaningful innovations in the long overdue delivery of justice for all.”

Martinez encouraged House members to continue to lead conversations about how innovation can help close the access-to-justice gap.

In addition to the ABA’s other initiatives, she recognized efforts by the Rule of Law Initiative and Center for Human Rights to help those who have been denied democracy and peace and work by the Diversity and Inclusion Center and its commissions on race, ethnicity, gender, sexual orientation, gender identity and disabilities.

In closing, Martinez contended that “membership recruitment is how we strengthen our voice.” She encouraged House members to share why they belong to the ABA, why they participate and lead, and how they know involvement in the association makes them a better lawyer with their colleagues at home.

“Help them understand what you already know,” Martinez said. “Being a part of the American Bar Association is part of something much bigger than any of us.”

Later in the House session, ABA Executive Director Jack Rives also encouraged delegates to explain the value proposition of ABA membership to fellow legal professionals. In a speech that quoted native Texans President Lyndon B. Johnson and the late U.S. Rep. Barbara Jordan, Rives told the attendees that the association is doing “better” at gaining and retaining dues-paying members since the new membership model was introduced.

Updated at 5:42 to include details from the speech of Jack Rives and video of President Judy Perry Martinez’s speech.