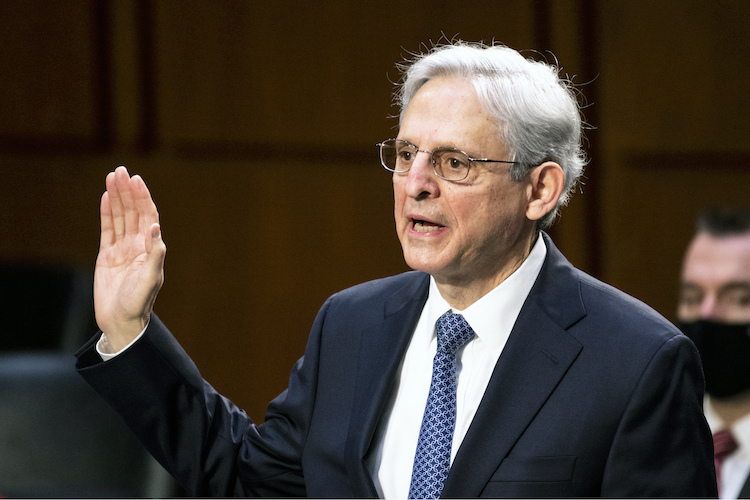 Judge Merrick Garland of the U.S. Court of Appeals for the District of Columbia Circuit was confirmed Wednesday as the next U.S. attorney general by a Senate vote of 70-30. Pictured here, he was sworn in at his confirmation hearing before the Senate Judiciary Committee on Feb. 22. AP Photo/Bill Clark.

Garland is confirmed as US attorney general

The U.S. Senate on Wednesday confirmed Judge Merrick Garland as the next U.S. attorney general by a 70-30 vote. Garland, a judge on the U.S. Court of Appeals for the District of Columbia Circuit, was previously nominated for the U.S. Supreme Court, but the Senate never acted on the nomination. During his confirmation hearing to lead the U.S. Department of Justice, Garland said he would not be swayed by politics. He is expected to be sworn in to his new job Thursday. (Law.com, the New York Times)

A Georgia lawyer charged in the Jan. 6 U.S. Capitol riot asked a federal judge Tuesday about having wine with dinner if he is released before trial. “I know my friends are probably going to want to take me out tonight to buy me a steak and a glass of wine,” lawyer William McCall Calhoun Jr. told U.S. District Judge Dabney Friedrich of the District of Columbia. The judge freed Calhoun on bail but banned him from posting on social media and required GPS monitoring. (Law & Crime)

Bid to remove judge over ruling fails in subcommittee

A bid to remove a Tennessee judge who expanded absentee voting has died in a subcommittee of the Tennessee House of Representatives. The subcommittee declined to advance the bill calling for a joint House-Senate committee to explore removal of the judge, Judge Ellen Hobbs Lyle of Davidson County, Tennessee. State bar associations had criticized the bill as a threat to the balance of power. (Courthouse News Service, the Tennessean)

Judge James d’Auguste of New York has tossed a defamation lawsuit filed against the New York Times by former President Donald Trump’s reelection campaign. The campaign had sued over an op-ed arguing that there was a “quid pro quo” between Trump and Russia to help beat Hillary Clinton in exchange for a pro-Russia policy. D’Auguste ruled that the article was protected opinion, and the campaign failed to show actual malice. (The New York Times, the Hill, the March 9 decision)