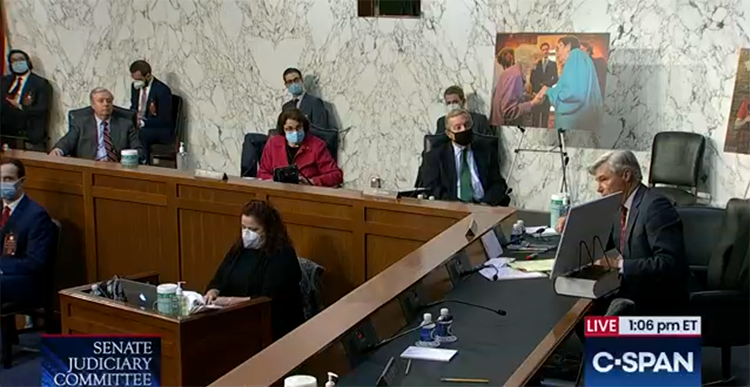 Masks, hand sanitizer and wipes were visible throughout the day as the Senate Judiciary Committee meets during the COVID-19 pandemic that has infected several members. Image from C-SPAN.

Members of the Senate Judiciary Committee will each get 20 minutes on Wednesday to question Supreme Court nominee Amy Coney Barrett.

Their questions follow 30-minute rounds of questioning by each senator on Tuesday in which Democrats pressed Barrett about the Affordable Care Act, abortion rights, LGBTQ rights and recusal.

Barrett said Tuesday that she had made no commitments on how she would rule in any case to President Donald Trump or anyone else. If she had, it would be “a gross violation of judicial independence,” she said. And it would be “a complete violation of the independence of the judiciary” for anyone to put a justice on the court as a means of achieving a particular result.

But Barrett did not talk about issues likely to come before the Supreme Court, and would not say whether she would recuse herself in specific cases, including any case involving 2020 election results.

Barrett was questioned about an ad she signed along with more than 1,200 people in 2006. The signers said they “oppose abortion on demand and defend the right to life from fertilization to the end of natural life.”

Barrett said she signed the ad while walking out of church, and she would not do the same thing now that she is a judge on the Chicago-based 7th U.S. Circuit Court of Appeals.

While Barrett would not say whether she would overrule Roe v. Wade, she did say the Supreme Court opinion establishing a right to abortion doesn’t fit the scholarly definition of “super precedent.”

Roe doesn’t fit into that category because there are still calls for it to be overruled, she said. Cases that do fall into that category, she said, include Marbury v. Madison, upholding judicial review, and the school desegregation decision Brown v. Board of Education.

Barrett also said she is not “hostile” to the Affordable Care Act, despite a law review article she wrote in which she said the chief justice’s opinion upholding the law had pushed it “beyond its plausible meaning to save the statute.”

Barrett also said she considered racism to be “abhorrent” and condemned white supremacy.

Barrett said she would never intentionally use a term that would cause offense to the LGBTQ community.