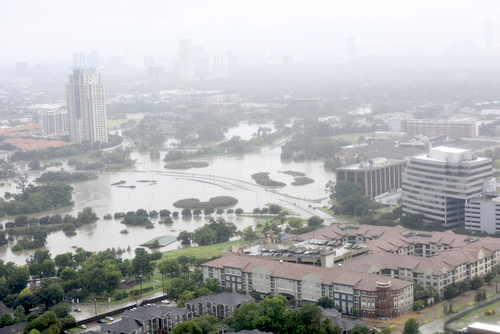 An aerial view of Houston showing the extent of flooding caused by Hurricane Harvey./AMFPhotography (Shutterstock.com.)

The pounding rain was easing slightly on Tuesday as the storm moved east toward Louisiana, though rising river levels are a concern, USA Today reports. The storm was expected to make landfall again on Tuesday or Wednesday, bringing more rain, according to the Wall Street Journal (sub. req.).

The Texas Supreme Court and Court of Criminal Appeals issued an emergency order on Monday that allows for changes in deadlines and procedures in courts affected by Harvey. A tweet by the Mississippi Access to Justice Commission said the Texas Supreme Court was expected to issue an order on Tuesday allowing lawyers outside of Texas to offer pro bono assistance in the state.

The commission also retweeted a message from the city of Houston that says no one at shelters will be asked for immigration papers and that such a rumor is false.

Several state courts in Texas and Louisiana are also closed. Texas state court closures are listed here. Courts that were closed until further notice included appeals courts in Houston and Beaumont, and lower courts in Aransas, Goliad, Harris and Liberty counties. Other courts were reopening Tuesday or later in the week.

Meanwhile, many Houston lawyers were working from home “if they are lucky enough to have power,” Texas Lawyer reports.

The Texas publication spoke with Ken Broughton, managing partner of Reed Smith’s Houston office, who rented a large pickup before the storm so he could drive through high water. He used the truck to collect donations from his neighbors in the Museum District and take them to the George R. Brown Convention Center, which was serving as an emergency shelter.

Broughton was planning to pick up his parents in on Monday afternoon in northwest Houston because their home had a chance of flooding.

Broughton said three lawyers at his firm had flooded homes.

Also dealing with flooding was Houston plaintiffs lawyer Stephen Liss, who fled his home when water from a bayou entered. Liss told Texas Lawyer he thought he had placed his belongings high enough to keep them safe, but when he returned on Monday, he saw he had not succeeded. The water had reached a high of 46 inches.

“Everything I own is gone,” Liss told Texas Lawyer.