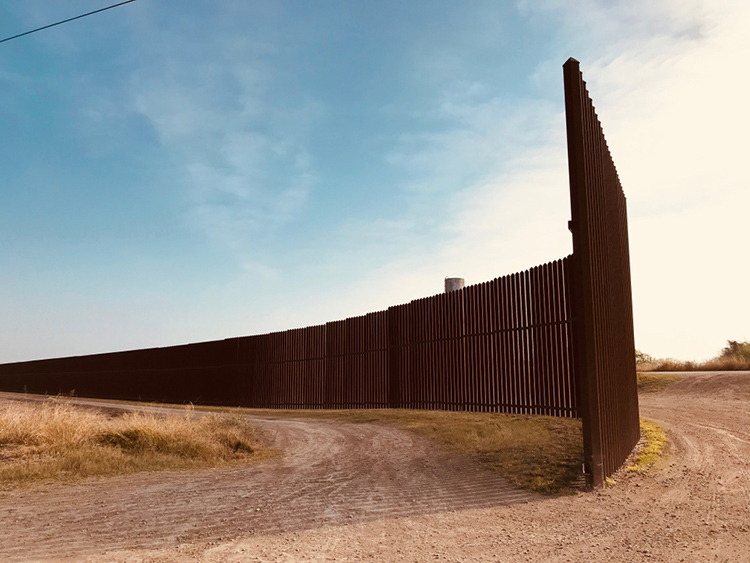 A U.S.-Mexico border fence in Texas. Image from Shutterstock.

Abbott announced his plans in a tweet, a press release and a letter to county officials along the border.

The invasion clause is at Article 1, Section 10 of the Constitution.

It provides: “No state shall, without the consent of Congress, lay any duty of tonnage, keep troops or ships of war in time of peace, enter into any agreement or compact with another state or with a foreign power or engage in war, unless actually invaded, or in such imminent danger as will not admit of delay.”

Abbott also plans to build a border wall in multiple counties, deploy gun boats, enter into a compact with other states to secure the border, and “enter into agreements with foreign powers to enhance border security.”

Abbott first authorized the National Guard and Texas police to act in July, directing them to return immigrants to ports of entry. He also referenced the invasion clause at the time.

Joseph Nunn, counsel for the Liberty and National Security Program at the Brennan Center for Justice at the New York University School of Law, called the invasion clause approach “flagrantly unlawful” in a post that he wrote for Just Security in July. He made a similar point in a tweet thread responding to Abbott’s latest announcement.

Nunn said Texas was not “actually invaded” and was not in “such imminent danger as will not admit of delay.”

“Even if Texas were being invaded,” Nunn tweeted, “that would not permanently transfer any authority over national security from the president to the governor of Texas. At most, U.S. states have the power to mount an initial defense to a sudden invasion. They may not fight a war.”

Nunn said Abbott’s actions were actually “a thinly veiled effort to take the reins on U.S. immigration policy.” But that would also be unconstitutional under U.S. Supreme Court precedent holding that immigration policy is “unquestionably” and “exclusively” a federal power, Nunn said.

“For all these reasons, the Biden administration would likely succeed in court if it sued to stop Abbott from carrying out his plans,” Nunn concluded.

Abbott’s announcement came one day before a federal judge in Washington, D.C., blocked the government’s use of Title 42 to expel asylum-seekers.

Title 42 is part of the Public Health Service Act of 1944. It was first invoked by the Trump administration to expel immigrants on the ground that they could contribute to the spread of COVID-19. A federal judge in Louisiana ruled in May that the Biden administration had to keep the policy in place during litigation.

On Tuesday, U.S. District Judge Emmet Sullivan of the District of Columbia ruled that the adoption of the Title 42 order was arbitrary and capricious in violation of the Administrative Procedure Act. Sullivan blocked its use.

CNN, the Washington Post, Reuters and the New York Times are among the publications covering the Title 42 decision. The American Civil Liberties Union announced the news in a press release.

As a result of the ruling, the New York Times said, “migrants who come to ports of entry along the border would not be turned away but would be allowed to lodge asylum petitions and perhaps remain in the country while they are under review.”

According to the Washington Post, Sullivan’s order makes the Louisiana lawsuit moot because of findings that the Title 42 order was invalid at the time of implementation.

The U.S. Department of Homeland Security obtained a five-week delay before implementation of Sullivan’s order to allow time to prepare.

ABA President Deborah Enix-Ross said in a Nov. 17 statement the ABA looks forward to the termination of the Title 42 expulsion policy.

“The ABA believes that all people seeking protection from persecution or torture are entitled to a full and fair adjudication comporting with U.S. and international law,” Enix-Ross said. “Instead, Title 42 has blocked asylum-seekers from applying for protection at the border and led to their expulsion from the U.S. without adjudication of their claims. The ABA House of Delegates voted to oppose this policy in February. … We welcome the move to resume normal processing of asylum-seekers, as required under domestic and international law.”

Updated Nov. 17 at 2:29 p.m. to include the statement from ABA President Deborah Enix-Ross.