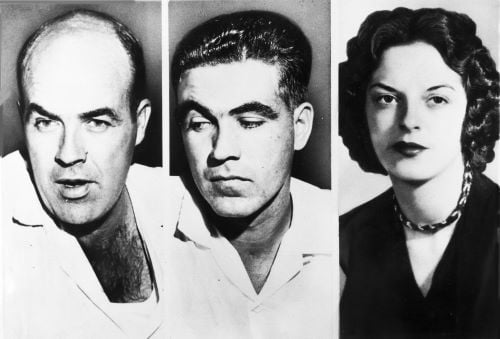 John W. Milam, left, and his half-brother Roy Bryant were charged with the murder of 14-year-old Emmett Till. Bryant’s wife, Carolyn Bryant Donham, has recently been accused in the kidnapping of Till. File photos from the Associated Press.

Researchers have found an unserved 1955 arrest warrant in the basement of a Mississippi courthouse that accuses Carolyn Bryant Donham in the kidnapping of 14-year-old Emmett Till, who was lynched after the white woman accused the Black teenager of making improper advances. Donham was married to one of the two men tried and acquitted in Till’s murder by an all-white jury. Family members are calling for the arrest of Donham, who is still alive. (The Associated Press, the New York Times, the Washington Post)

Pentagon will still provide some abortions

The Pentagon said Tuesday the U.S. Supreme Court decision overturning Roe v. Wade doesn’t prevent the military from continuing to pay for or perform abortions in the narrow circumstances allowed by federal law. The Department of Defense will continue to provide those “covered abortions,” which are allowed when the mother’s life is endangered or the pregnancy is the result of rape or incest. (The Hill, Department of Defense press release, Department of Defense memo)

The Michigan Supreme Court ruled Tuesday that a judge acting under the state’s “one-man grand jury” law didn’t have the authority to issue indictments against three former state officials in the Flint, Michigan, water crisis. State law gives judges authority to investigate, subpoena witnesses and issue arrest warrants—but not to issue indictments, the court said. The ruling is a boon for former Gov. Rick Snyder, who was among those indicted by the judge. (The Detroit Free Press, Courthouse News Service, the June 28 opinion)

A New York appeals court has disbarred a lawyer who pleaded guilty to securities fraud for lying to investors in his litigation funding business. Jaeson L. Birnbaum, 47, founder of the defunct company Cash4Cases, was subject to automatic disbarment because of the conviction. Prosecutors say Birnbaum admitted that he used investor funds for his own purposes and double-pledged the same case recoveries as collateral. Birnbaum, who lives in Boca Raton, Florida, is scheduled for sentencing July 7. (Reuters, Law.com, the Legal Profession Blog, Department of Justice press release, June 21 appellate decision)