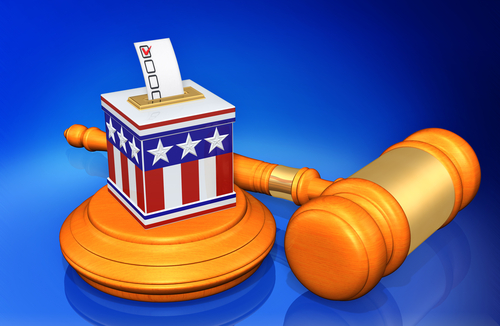 Election litigation was heating up in battleground states as voters went to the polls Tuesday.

“Even before Tuesday’s midterm elections,” Bloomberg Law reports, “more lawsuits have been filed this year than in all of 2020 by Democrats and Republicans challenging everything from who can vote to where ballots are collected and monitored.”

Amid the litigation, Florida is clashing with the U.S. Department of Justice over DOJ plans to monitor polling sites in the Democratic-leaning counties of Miami-Dade, Broward and Palm Beach. They are among 64 jurisdictions that the DOJ is monitoring during the election, according to a DOJ press release.

The chief counsel for the Florida Department of State, Brad McVay, informed the DOJ that the state won’t accept DOJ poll monitors, the Washington Post reports. McVay said the state will be sending poll monitors to the counties. The DOJ said it had received the letter and has monitors outside the polling places.

The clerk in Cole County, Missouri, has also refused to allow DOJ monitors in polling places, the St. Louis Post-Dispatch reports. Missouri Secretary of State Jay Ashcroft is supporting that decision. The DOJ said it will keep its monitors outside the Cole County polling places.

Among the recent developments in litigation:

• A suit filed Sunday alleges that Cobb County, Georgia, election officials failed to mail absentee ballots to more than 1,000 voters. On Monday, Judge Kellie Hill of Cobb County, Georgia, ordered the county to overnight ballots to 469 voters who still hadn’t received them and to extend the deadline to accept returned ballots from the affected voters to Nov. 14, the same deadline for overseas and uniformed voters. The case, Cook v. Cobb County Board of Elections, was filed on behalf of Georgia voters by Dechert, the American Civil Liberties Union and the Southern Poverty Law Center. (Law.com, Democracy Docket, Hill’s decision, ACLU press release)

• A suit filed in federal court Monday contends that Pennsylvania’s failure to count undated or wrongly dated mail-in ballots violates the materiality provision of the Civil Rights Act and the First and 14th Amendments. The suit, Eakin v. Adams County Board of Elections, was filed by three Pennsylvania voters, the campaign for Democratic U.S. Senate candidate John Fetterman, and two Democratic groups. In a different suit, Ball v. Chapman, the Pennsylvania Supreme Court on Nov. 1 evenly split on whether federal law bars election officials from discarding such ballots. The state supreme court said the ballots shouldn’t be counted, but county boards of elections should set aside and preserve the absentee ballots. (Democracy Docket, the Nov. 7 suit)

• Judge Timothy Kenny of Wayne County, Michigan, on Monday tossed a suit that sought to restrict the absentee ballot process in Detroit by requiring voters to request the ballots in person, to verify their identities in person, and to submit the ballots to an election clerk in person. One of the plaintiffs in the suit, Karamo v. Winfrey, is Kristina Karamo, a Republican running for Michigan secretary of state. (Democracy Docket, the Detroit Free Press, Kenny’s opinion)

• A suit filed Nov. 4 alleged that a Champaign County, Illinois, deputy clerk had multiple unsealed ballots in her car. The allegations in the suit filed by the chairman of the Champaign Republican Party were based on “photographic evidence.” The clerk submitted evidence that the ballots were sample ballots to test voting machines. A Nov. 7 agreement by the parties required the clerk’s office to seal and hold the test ballots. (Democracy Docket, WCIA)

• The Beaumont chapter of the NAACP filed a Nov. 7 suit alleging that Black voters in Beaumont, Texas, were being intimidated by white poll workers who followed them around the polling place and asked for their address in “aggressive tones” without asking for the same information from white voters. The suit also alleged that the poll workers helped white voters scan their ballots but not Black voters. U.S. District Judge Michael J. Truncale of the Eastern District of Texas banned poll workers from requiring voters to publicly state their addresses, banned them from standing near voters who are casting ballots—with limited exceptions—and required the workers to help scan ballots if requested. (Democracy Docket, Truncale’s order)

• U.S. District Judge John Kness of the Northern District of Illinois won’t resolve a suit challenging the validity of some mail-in ballots in Illinois until after Election Day. Kness scheduled oral arguments for Dec. 5 on a motion to dismiss the suit filed by conservative legal organization Judicial Watch on behalf of a downstate Republican congressman and two GOP officials. The suit challenges a 2015 state law that allows the counting of mail-in ballots postmarked on or before Election Day if they are received within 14 days of the election. The lawsuit contends that the Illinois law conflicts with federal law setting the date for federal elections. (The Chicago Tribune)