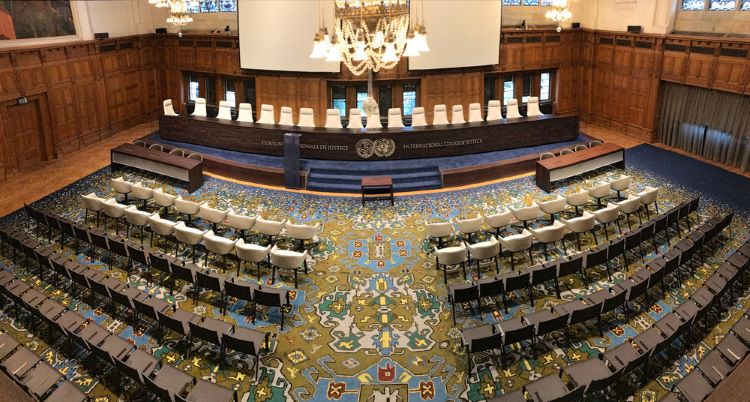 The International Court of Justice courtroom, the principal judicial organ of the United Nations located at the Hague. Image from Shutterstock.

The United Nations’ top court on Wednesday told Russia to halt military operations in Ukraine in interim “provisional measures” that are issued before a case is formally heard.

The U.N.’s International Court of Justice told Russia that it should suspend its military operations immediately and stop further attacks by any armed units, according to a press release. The court’s March 16 order also told both sides that they should refrain from any action that might aggravate or extend the dispute.

Ukraine has made a plausible claim of irreparable harm meriting the provisional measures, the court said.

“The ‘special military operation’ being conducted by the Russian Federation has resulted in numerous civilian deaths and injuries,” the court said. “It has also caused significant material damage, including the destruction of buildings and infrastructure. Attacks are ongoing and are creating increasingly difficult living conditions for the civilian population. Many persons have no access to the most basic foodstuffs, potable water, electricity, essential medicines or heating. A very large number of people are attempting to flee from the most affected cities.”

The decision “appeared to have largely symbolic significance,” the Washington Post reports.

If Russia doesn’t comply, judges can ask the United Nations Security Council to issue sanctions, but Russia has a council veto.

Russia didn’t participate in oral arguments before the court, but it did submit a document arguing that the court had no jurisdiction to hear the case.

Ukraine had argued that the court had jurisdiction because Russia justified its invasion through false claims of Ukrainian genocide, and Ukraine and Russia had signed the 1948 Convention on the Prevention and Punishment of the Crime of Genocide.

At issue, Ukraine argued, was whether Russia could take military action because of its claim of genocide in Ukraine’s eastern regions of Luhansk and Donetsk.

The court said Ukraine’s allegations, at this stage, are sufficient to establish jurisdiction to resolve the dispute under the genocide convention.

At this point in the proceedings, the court said, “it suffices to observe that the court is not in possession of evidence substantiating the allegation of the Russian Federation that genocide has been committed on Ukrainian territory.”

The court also said it is “doubtful” that the convention authorizes a party’s “unilateral use of force in the territory of another state for the purpose of preventing or punishing an alleged genocide.”