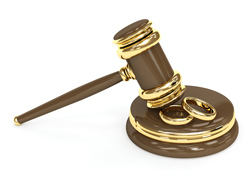 ABA President Deborah Enix-Ross is calling on members of the U.S. Senate to vote for the Respect for Marriage Act, which the U.S. House of Representatives passed with significant bipartisan support in July. In a letter sent to senators Thursday, Enix-Ross pointed out that marriage equality is not protected by federal statute, even though the U.S. Supreme Court has recognized that the 14th Amendment protects “the fundamental right to marry the person you love.” In addition, Enix-Ross said, the 1996 Defense of Marriage Act defines marriage as the union between one man and one woman and permits states to refuse to recognize same-sex marriages granted in other states. “The Respect for Marriage Act would rectify these inconsistencies by repealing DOMA and requiring the federal government to recognize a marriage between two people if the marriage is valid in the state where it was performed,” wrote Enix-Ross, who added that the ABA adopted policy in support of the bill in August. (The ABA letter, the ABA policy)

Stanford Law School has announced that it is participating in a pilot program that finances legal education through an “income share loan.” The program is intended to allow for greater career choice while making loan repayment easier for graduates in low-income careers. Up to 20 law students will get loans of up to $170,000 through the Flywheel Fund for Career Choice, a nonprofit formed by alumni of Harvard and Stanford law schools that is funded with donations. After graduation, law grads will make payments of 10% of their incomes for 12 years to Flywheel—with some exceptions. If law grads earn less than $100,000, Stanford will cover their loan repayments. If they earn $100,000 to $115,000, the school will cover partial payments. And if they make more than $225,000, they won’t have to pay 10% on the overage. No law grad will have to pay more than they would have under a Grad PLUS Loan in effect at the time that they entered into the income share loan. (Stanford Law School press release, Reuters)

The Biden administration has adopted a “public charge” rule that prevents immigrants from obtaining permanent residency if they are likely to become primarily dependent on the government for assistance. The U.S. Department of Homeland Security adopted the rule after dropping a Trump administration rule that would have expanded the definition of “public charge.” The Trump-era rule would have allowed the government to deny green cards to immigrants who use government benefits such as Medicaid, food stamps and housing assistance for more than a year in any three-year period. (Reuters)

Democratic California Gov. Gavin Newsom has signed a bill that creates a mental health “CARE Court” in every county to deal with issues of homelessness and mental health. The law authorizes doctors and first responders to refer people suffering from schizophrenia or psychotic disorders to the court, in which they would be assigned a public defender. The court can order a treatment plan administered by a local government that could include social services and housing. People who are facing criminal charges would face prosecution if they don’t accept care. (Courthouse News Service, Sept. 14 press release)

Alabama prepares to use nitrogen hypoxia in executions

Alabama doesn’t plan to use nitrogen hypoxia for the next scheduled execution in the state Sept. 22. But in a court affidavit Thursday, a state official said Alabama is preparing to use the method, which administers nitrogen to the inmate to deprive the body of oxygen. Alabama is one of three states that authorize such executions, but no state has used it so far. (The Associated Press)