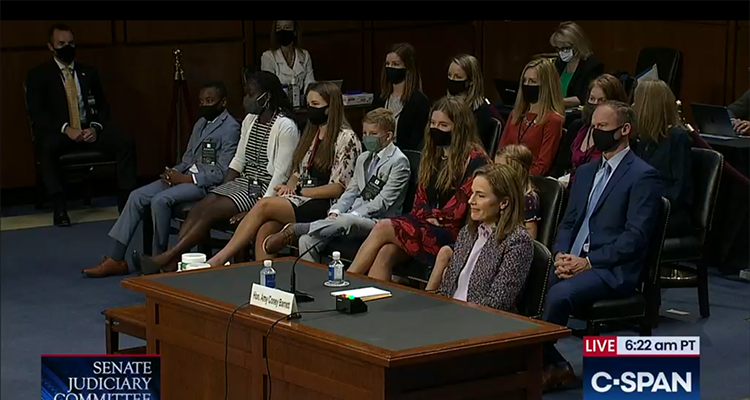 Judge Amy Coney Barrett was joined by members of her family on Wednesday, her final day of testimony. Image from C-SPAN.

On the agenda are appearances by two representatives of the ABA Standing Committee on the Federal Judiciary, which gave Barrett a “well qualified” rating. Others who will be testifying include a retired federal appeals judge, representatives of advocacy groups, a former law clerk to Barrett and a former Notre Dame law student of Barrett’s, report the National Law Journal and USA Today.

Some witnesses will talk about how Barrett’s potential rulings as a Supreme Court justice would affect them personally.

The ABA standing committee representatives are its chair, Randall Noel of Memphis, Tennessee, and Pamela Roberts of Columbia, South Carolina, the lead evaluator for Barrett’s evaluation. In prepared testimony, Noel said Barrett had high praise from lawyers and judges who spoke with the standing committee in all three areas it considers: integrity, professional competence and judicial temperament.

Republicans scheduled an Oct. 22 committee vote on Barrett’s confirmation as Democrats sought an indefinite delay on Thursday, the New York Times and Politico report. The full Senate could vote by Oct. 26.

Barrett, currently a judge on the Chicago-based 7th U.S. Circuit Court of Appeals, wrapped up her testimony on Wednesday.

Barrett told senators that sharing the late Justice Antonin Scalia’s originalist and textualist judicial philosophy doesn’t mean “every sentence that came out of Justice Scalia’s mouth or every sentence that he wrote was one that I would agree with,” she said.

Democratic Sen. Christopher Coons of Delaware asked Barrett whether she agreed with particular decisions by Scalia, but Barrett would not answer. “I hope that you aren’t suggesting that I don’t have my own mind,” she said.

One of the cases Coons talked about was Griswold v. Connecticut, the 1965 Supreme Court decision holding that married couples have the right to use contraceptives in the privacy of their home. Scalia had said the case was wrongly decided.

Barrett said she wouldn’t give her view on the case, while adding its precedent was very “unlikely to go anywhere” because no legislature will outlaw contraception. She added that Coons’ questions appear to be laying the groundwork for questions about whether Roe v. Wade was wrongly decided, something she couldn’t address.

Barrett was also questioned about tweets by President Donald Trump and whether she believes a president who refuses to comply with a court order is a threat to our constitutional system. Barrett didn’t answer that question or a query about whether the president can pardon himself.

Barrett did say that no one is above the law, but a court cannot control how the other branches of government respond to its rulings. “The Supreme Court can’t control what the president obeys,” Barrett said.

One Republican senator, Sen. Joni Ernst of Iowa, asked Barrett how she would respond to those who say she is not an adequate replacement for the late Justice Ruth Bader Ginsburg.

Barrett said she believes judicial philosophy is an appropriate topic to explore, and it’s a perfectly understandable ground for a vote against her confirmation.