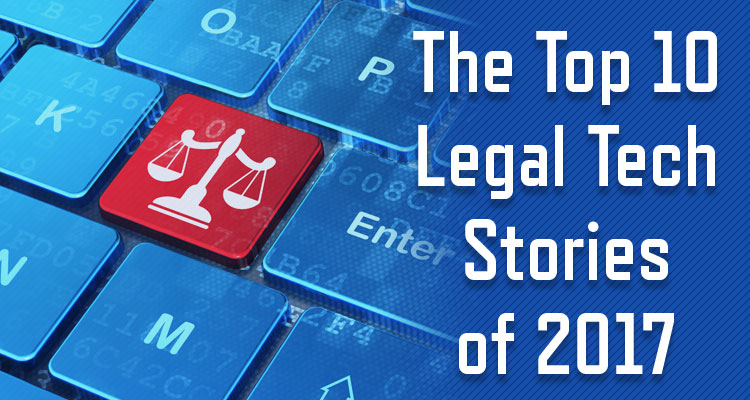 What were the year's most important legal tech stories? Read ABA Journal legal affairs writer Jason Tashea's takes on how cybercrime to self-tracking devices to tweets had an impact on the law in 2017.

1. FCC topples net neutrality. In December, the Federal Communications Commission repealed Obama-era net neutrality rules. Originally passed in 2015 and upheld by the U.S. Court of Appeals for the D.C. Circuit in 2016, the rules required that internet service providers like AT&T, Comcast and Verizon to treat all web traffic equally. This meant that, for example, providers would not be allowed to “throttle” or change the speed a person accesses a website. The repeal allows ISPs to block or slow some online traffic. In other cases, the provider can negotiate with a website for “fast lanes” to users.

The battle over these rules were heated and partisan, the final vote for repeal was 3-2, along party lines.

While the public actively petitioned the FCC over the rule change, New York State Attorney General Eric Schneiderman claimed that “millions of fake comments have corrupted the FCC public process,” which he said, in a press release, may implicate New York criminal law. The Pew Research Center found that 94 percent of comments were submitted multiple times and 57 percent used temporary or duplicate email addresses. The FCC’s general counsel said the agency would not work with Schneiderman’s office on the investigation.

Minutes after the repeal vote, both Schneiderman, and Attorney General Bob Ferguson of Washington state announced plans to sue the FCC.

2. Paradise Papers detail how the world’s rich avoid taxes. In November, offshore law firm Appleby claimed that a cybercriminal had stolen 13.4 million documents, collectively known as the Paradise Papers, and turned them over to journalists. The documents showed how the world’s elite move their money through shell corporations and tax havens to avoid taxes. It also provided evidence of how Russian state money flowed into tech giants like Facebook and Twitter.

World leaders were named in the documents as well, including Prince Charles and Queen Elizabeth II of England, President of Colombia Juan Manuel Santos and Queen Noor of Jordan. U.S. Secretary of Commerce Wilbur Ross was among 12 other Trump administration members, advisers and donors with offshore interests discussed in the documents, according to the International Consortium of Investigative Journalists, which published the Paradise Papers.

In December, Appleby sought a permanent injunction against the BBC and the Guardian from further use of the leaked information. Both outlets said they would defend themselves and that the stories they published based on the documents were in the public interest.

3. The president’s Twitter accounts are a legal liability. To state the obvious: The president is not coy on Twitter. While his bombastic, online persona was a strength as a candidate, his near-daily Twitter rants have caused headaches for his personal and government legal teams.

In litigation over the administration’s travel ban, affecting primarily Muslim-majority countries, the president’s tweets were entered as evidence of anti-Muslim bias. A federal district judge in Maryland, when ruling against parts of the ban, included a detailed history of the president’s statements on Twitter. More recently, after the president retweeted anti-Muslim videos from a British ultra-nationalist, Neal Kaytal, a lawyer opposing the travel ban from Hawaii, enthusiastically tweeted, “Thanks! See you in court next week.”

Beyond the travel ban, the president tweeted himself into a different pot of hot water after his first national security adviser, Michael Flynn, pleaded guilty in December as a part of the ongoing Russia investigation. He wrote, “I had to fire General Flynn because he lied to the Vice President and the FBI. He has pled guilty to those lies. It is a shame because his actions during the transition were lawful. There was nothing to hide!” After many interpreted this as an admission to obstruction of justice, John Dowd, the president’s personal attorney, took credit for writing the tweet.

4. SEC gets serious about ICOs. For those into cryptocurrency, 2017 could be summed up in three letters: I-C-O. The Initial Coin Offering—which uses distributed ledger technology that is also called blockchain—is a fundraising mechanism that increased its popularity as an alternative to traditional fundraising. According to Coinschedule, an ICO information aggregator, in the 11 months preceding December 2017, more than 200 ICOs raised $3.6 billion in funds, around 40 times more than the same period a year before.

With this digital gold rush showing no signs of slowing down, the Securities and Exchange Commission decided to ramp up its enforcement. This summer, the SEC released an investigatory report, colloquially “The DAO Report” (PDF), which said that, in some instances, ICOs were securities. Since then the commission has released three ICO-related investor alerts and filed legal actions against various ICOs and ICO-related entities that ran afoul of securities law.

In just one example, the SEC brought an emergency action against PlexCorps, a Canadian business promising a huge payoff with their ICO. Not registered as a security with the SEC, the company raised $15 million between August and December 2017. A federal judge froze the parties’ assets pending trial. With the launch of SEC’s new cyber unit, which brought this action, expect more like this in 2018.

5. Patent trolls take a loss. Thanks to the U.S. Supreme Court, the days of patent trolls filing suit in certain locations for strategic reasons may become a thing of the past. In May, in the case of TC Heartland v. Kraft Foods Group Brands, a unanimous court made it more difficult for patent infringement plaintiffs to forum-shop. Justice Clarence Thomas, writing for the court, determined that the federal statute’s use of “residence” when discussing patent venue only refers to the state of incorporation for a U.S. company.

Experts expect this outcome will make it harder for patent assertion entities—which are known for acquiring patents not to produce, but to make money by suing supposed infringers—to pick certain venues to file lawsuits. For instance, one popular location has been the U.S. District Court for the Eastern District of Texas, where in 2015, 44 percent of the country’s patent litigation took place. The Harvard Business Review reported that this type of litigation had cost billions of dollars in lost venture investing and decreased millions in research and development funding by companies sued by these entities.

6. A court-ordered glimpse into a black box. In October, in a rare win for algorithmic transparency advocates, a federal judge in the U.S. District Court for the Southern District of New York, required the unmasking of an algorithm used in genotyping—a type of DNA comparison—called the Forensic Statistical Tool. While the judge had already allowed the defense to analyze the tool under a protective order, journalists at ProPublica filed a motion arguing there was public interest in the code. The tool’s code is now posted online.

Before getting too excited about the onslaught of court-ordered open-sourced algorithms, it should be noted that FST was created and operated by the state of New York and had stopped being used in new investigations earlier in the year, giving this case a unique fact pattern and not making it the easiest cognate with many privately held and black-box algorithms being used by government agencies.

7. DLA gets Pwned. In June, DLA Piper had its worldwide operations ground to a halt from a cyberattack. Dubbed “NotPetya,” the malware locked up and encrypted devices it came into contact with. The infection spread to their offices around the globe, forcing employees to shut down their computers and refrain from sending digital communications. It was reported in July that the attack could wind up costing the firm “in the millions.”

8. Internet of Crime. The last few holiday shopping seasons have been littered with Amazon Echos, Fitbits and other so-called Internet of Things devices. With already 8.4 million of these devices worldwide, according to Gartner, the proliferation of these self-imposed tracking and recording gadgets has brought increased interest from law enforcement for the data they create.

This year, saw the nolle prosequi of James Bates, an Arkansas man charged with the 2015 murder of a man found dead in his hot tub. Next to the tub was an Amazon Echo, which police sought records from. Amazon initally fought the warrant in court on First Amendment grounds, but ultimately released the evidence after the defendant in court filings indicated that he did not object. Prosecutors dropped their case against Bates in November, NPR reported at the time.

Amazon and Fitbit have released statements saying they would not hand over evidence to a law enforcement agency without a valid demand. However, Amazon’s ability to hide behind this request could be affected by the Supreme Court in 2018, when justices are expected to rule on Carpenter v. U.S. At issue is whether law enforcement can obtain historic cellphone data without a warrant, which could help clarify the parameters of the Fourth Amendment when law enforcement seeks information a suspect gives to a third party.

9. Legal Tech consolidation ramps up. 2017 saw a lot of legal tech buyouts and consolidations from online communities to major court technology vendors, indicating that the legal tech marketplace is heating up.

The year wrapped up with the announcement that Evolve Law, the online legal technology community, was going to merge with Above the Law, the popular legal news blog.

10. SCOTUS v1.0 Starting on Nov. 13, 2017, the Supreme Court of the United States started an electronic filing system for the first time. Developed in-house, the e-filing portal will allow the public to access “virtually all new filings” for free. Parties represented by counsel are expected to file paper copies, the official form of filing, at the court, and a digital version. Pro se parties will not be required to use the e-filing system. Instead, documents from pro se parties will be scanned by court staff for upload later.

No word yet on when the court will allow live-streaming of oral arguments.