How introverts can make networking work for them

You have to network to get work, but it doesn’t come naturally to everyone. Carol Schiro Greenwald spends her time teaching law firms to grow their businesses and their profitability,…

Did an ax murderer go free? ‘The Trial of Lizzie Borden’ examines the evidence

Kenneth Imo spent years playing college football for Southern Methodist University, working his way up in the U.S. Air Force and leading the charge for diversity in two international law firms. Imo mined his experiences for his book, Fix It: How History, Sports, and Education Can Inform Diversity, Inclusion, and Equity Today.

From Columbine to Parkland: How have school shootings changed us?

The 10 years that Dave Cullen spent researching and reporting on the 1999 shootings in Littleton, Colorado, for his book Columbine were so draining that he experienced secondary PTSD. So on Feb. 14, 2018, when he heard about the shootings at Margery Stoneman Douglas High School in Parkland, Florida, he had no initial intention of writing about them. But in the nearly 20 years since the Columbine shootings changed our expectations about school safety, there had been a number of changes—including what the children directly impacted were able to do to change our national conversations about gun laws.

Building blockchain expertise into a practice that pays

Blockchain's a buzzword, but what does it mean? In this episode of the Modern Law Library, our guests James A. Cox and Mark W. Rasmussen give a breakdown of what blockchain is, the emerging legal issues the technology is prompting, and why Jones Day thinks that it's an important emerging practice area.

How introverted lawyers can harness their traits for success 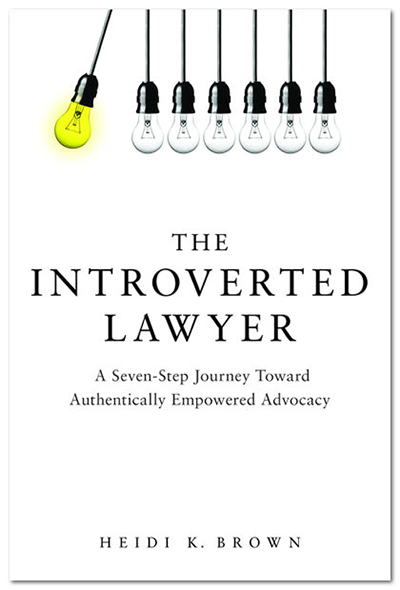 “Fake it till you make it.” For Heidi K. Brown, trying to mimic her extroverted peers in litigation always felt forced. She…

A new year, a new you? Stewart Levine has spent over three decades speaking to legal professionals after suffering from burnout as a lawyer himself. His new book—The Best Lawyer You Can Be: A Guide to Physical, Mental, Emotional, and Spiritual Wellness—combines personal experiences and essays from industry leaders, meant to inspire far beyond January’s best intentions.

All judges have cases that stick with them and linger in their memories. Sometimes it was because of the high profile of the case, and sometimes an obscure case had personal resonance because of the people or issues involved. In Tough Cases: Judges Tell the Stories of Some of the Hardest Decisions They've Ever Made, readers can learn the backstories to some of these decisions.

“Show me the money!” After navigating the ups and downs of being an agent, Darren Heitner pursued another avenue that combined his love of negotiation and athletics: sports law. With…

Ken Starr shares his side of the Clinton investigation in ‘Contempt’

Ken Starr has been a D.C. Circuit Court judge, a law school dean and the U.S. solicitor general. But he is best known for his work in the Office of the Independent Counsel and the report that came to colloquially bear his name.

How to stop worrying and learn to love data-driven law

Data informs, and in some cases controls, every aspect of modern life. Well, almost every aspect. “If you look at finance or medicine or sports, almost every other thing in the world is using data to make better decisions,” says Ed Walters. “Everything except law.”

We need to talk about abortion, says author of ‘Scarlet A’

Three in 10 American women who are 45 or older have had an abortion, Katie Watson, author of Scarlet A: The Ethics, Law & Politics of Ordinary Abortion, tells the ABA Journal’s Lee Rawles. For women 44 and younger, one in four are projected to have an abortion in their lifetime. Yet for all the fiery rhetoric about the legality of abortion, Watson–who teaches bioethics, medical humanities and constitutional law at Northwestern University's Feinberg School of Medicine–has found a reluctance by people to discuss their own personal experiences with abortion, or even the nuances of their views on its ethics.

Law school can be a lonely, stressful time, and it’s easy to feel like you're failing to fit the model of the perfect law student. But there’s no one right way to go to law school, says sociology professor Kathryne M. Young, author of How to Be Sort of Happy in Law School; you can craft your own experience.

Can you become a better lawyer in 5 minutes a day? This author thinks so (podcast)

Many people promote a daily practice of meditation, spiritual contemplation and mindfulness as a way to improve your personal life and well-being. Attorney Jeremy Richter argues that creating a similar daily ritual to focus on developing your professional skills can be just as helpful to your clients, career and law practice.

In this episode of the Modern Law Library, the ABA Journal’s Lee Rawles speaks with Richter, author of Building a Better Law Practice: Become a Better Lawyer in Five Minutes a Day. The book is structured to provide a daily reading on personal and professional development over a seven-week time period.

What would it mean to impeach a president? (podcast)

The authority to impeach and remove a U.S. president is one of the legislative branch's most powerful weapons. But in the country's history, despite many periods of open hostility between Congress and the executive branch, no president has been removed from office through the impeachment procedure. Why is that?

From 1873 until his death in 1915, Anthony Comstock was the most powerful shaper of American censorship and obscenity laws. Although he was neither an attorney nor an elected official, Comstock used an appointed position as a special agent of the U.S. Post Office Department and legislation known as the Comstock Laws to order the arrests and prosecutions of hundreds of artists, publishers, doctors and anyone else he felt was promoting vice.

After losing both the 1960 presidential election and the 1962 California governor’s race, Richard Milhous Nixon vowed at a press conference: “You won’t have Nixon to kick around anymore” and seemed to have written the epitaph to his political career. He left for New York and became a partner in a white shoe law firm. Yet six years later, he would win the White House, in no small part because of that firm.