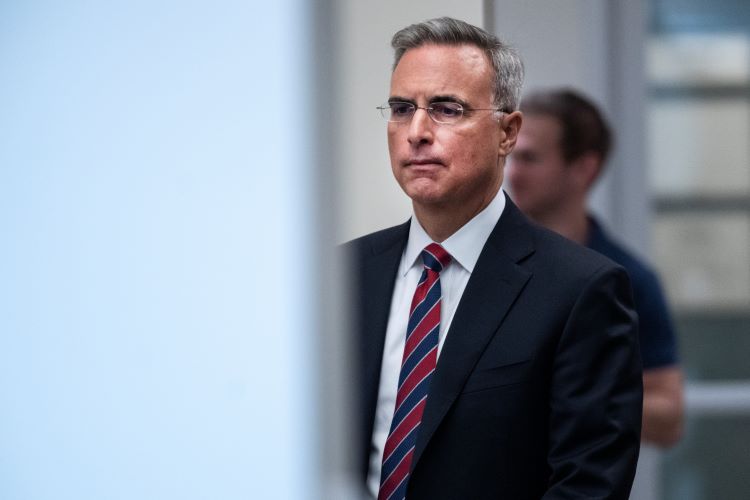 Pat Cipollone, the former White House counsel to former President Donald Trump, is seen July 8 during a break in an interview with the House select committee investigating the Jan. 6, 2021, U.S. Capitol riot. Photo by Tom Williams/CQ Roll Call via the Associated Press.

Former White House counsel Pat Cipollone has been subpoenaed to testify before the House select committee investigating the Jan. 6, 2021, U.S. Capitol riot. The subpoena follows testimony by former White House aide Cassidy Hutchinson claiming that Cipollone had warned of being charged “with every crime imaginable” if former President Donald Trump accompanied protesters to the Capitol on Jan. 6. Cipollone has reportedly negotiated a deal for his testimony, according to the New York Times and CBS News, which relied on anonymous sources. (The Washington Post, the New York Times, CBS News)

Former Judge Alex Kozinski of the 9th U.S. Circuit Court of Appeals at San Francisco is representing former President Donald Trump in his lawsuit against Twitter for suspending him from the website. Kozinski was hired to help on an appeal following the lawsuit’s dismissal. Kozinski retired from the 9th Circuit in 2017 following allegations of sexual misconduct. (Reuters via How Appealing)

President Joe Biden had planned to nominate anti-abortion Republican Chad Meredith to a federal judgeship in Kentucky on June 24, the day that the U.S. Supreme Court announced its opinion overturning Roe v. Wade. The White House told Democrat Kentucky Gov. Andy Beshear of Biden’s plans in an email sent to his office. The nomination announcement was not made. Meredith was previously Kentucky’s solicitor general. Beshear said he hopes that Biden has reconsidered. Some think that Biden agreed to nominate Meredith as part of a larger deal on nominations. (The Louisville Courier Journal, Reuters, Law360)

Researchers have documented 550 instances of prosecution misconduct in death penalty cases since 1972 that either led to reversals or affected the cases of exonerees, according to an analysis by the Death Penalty Information Center. The most common types of misconduct were withholding favorable evidence, followed by improper arguments, and use of or failure to correct false evidence. (Death Penalty Information Center overview)

DOJ settles suit by men rounded up after Sept. 11

The U.S. Department of Justice has agreed to pay $98,000 to resolve a lawsuit by six men who were rounded up after the Sept. 11, 2001, terrorist attacks and detained without charges. The department previously settled a suit in 2008 by the initial five plaintiffs. According to the Associated Press, the settlement “is somewhat unusual because federal courts at nearly every level, including the Supreme Court, had thrown out large chunks of the lawsuit.” (The Associated Press)

Former Minneapolis police officer Derek Chauvin was sentenced to 21 years in prison Thursday after he pleaded guilty to federal civil rights charges in the May 2020 death of George Floyd. He will serve the sentence concurrently with his 22.5-year sentence in state court for second- and third-degree murder and second-degree manslaughter. Chauvin will be transferred from a maximum security prison in Minnesota to a federal prison to serve the sentence. (The Associated Press)